By Blaze Schwaller
Under Coaching & Self Improvement
7 min read

The Snails In the Pot

Ever have one of those moments when you suddenly realize that the world has WAY more going on than you’re aware of and it just kind of smacks you in the face?

I had one of those moments this week when my daughter tried to give me back a plant we had given her as her first “responsibility.”

She had persuaded me to give her my aloe plant as well as this tiny succulent, but two days later she decided that she only felt comfortable with one responsibility, not two. So, I should take this potted plant back, and she’d handle the aloe, OK?

I was not exactly thrilled by this turn of events, but I took the plant back and thanked her for being honest. I’d rather have her confidently taking care of one plant she wants than getting overwhelmed or upset at having two.

I set the pot on the table and peered at the plant.

Around the edges of the pot were little bumps.

I touched one. It was hard. I scraped a few into the dirt. They were holding on pretty well to the pot.

Then I looked more closely at the soil. I saw a few round spiraling shapes that I took to be worm casings. I discovered a large one, almost a centimeter across. I poked it. It was solid, with no give and definitely not a worm casing.

I scooped a few up from the dirt and placed them on a plastic pringles cover.

In the light I could see that they were snail shells, most of them less than a millimeter across.

In the middles of the shells I could see a shadow blocking the light from passing all the way through. And I wondered if they weren’t simply shells put in the soil as fertilizer, but perhaps living snails.

So my daughter and I did an experiment.

I had her drop some water onto each shell and sprinkle some dirt around on the plastic cover. And we waited and watched.

Sure enough, snails emerged from their shells and began scooting around. Their eye stalks bent this way and that, and they left trails as they searched for plant life to nibble. 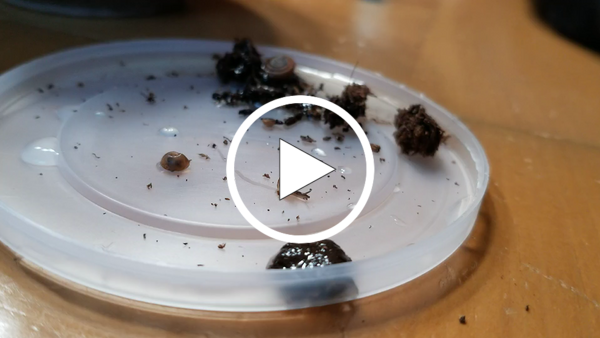 This pot and soil had sat dry and unattended for an entire summer in our garage.

It was the remnants of a succulent plant that had mysteriously died last spring when I watered it perhaps a bit too much. I thought it had been the watering that had killed my plant but now I wondered if it has actually been the snails that had eaten the plant when it got enough water to revive them.

Later, we had transferred a new succulent plant to this pot thinking to give our child a difficult-to-destroy plant as her first foray into taking care of a living thing.

But by the end of that evening, I knew that this new succulent was about to meet the same fate as the last one.

I counted at least 25 snails in the pot in various growth stages.

Perhaps my kid intuitively knew that taking care of that many creatures was too much of a responsibility. At least that’s what she maintains now.

Either way, I now have the pot back, a thriving village of snails, one sad succulent, and all the responsibility.

We have begun bringing in fallen leaves from outside for the snails, and I am keeping their pot far from my other plants. The snails are pretty cool but I don’t want any unexpected migrations.

It struck me, isn’t it strange how there was an entire extended family of snails living in my plant and I had absolutely no idea that they were there?

If I hadn’t been curious about the bumps on the pot rim or decided to poke at the “worm casing” I would never have noticed them.

Their lives would have gone on.

One day I would water this plant too much and the snails would spring into action and growth, slowly killing my plant the way they did the last one. I would be none the wiser, only confused about why I couldn’t seem to keep a low-maintenance plant alive.

Finding the snails made me aware of just how much goes on around me that I am completely oblivious to.

It showed me how my focus is elsewhere but that at any time I can tune into new information and be surprised.

Sometimes what we think is happening isn’t what’s happening at all. Causeless events have causes we just have no awareness of, and so we don’t see them.

Their existence doesn’t threaten our food supply or security. They don’t change my business plans, my kid's school plans, or much of anything really, as far as our daily lives go.

What’s cool about them is that the way they live their lives is completely alien. They come out when there’s water and apparently can hibernate for months or years without any. Wow!

Finding those snails reminds me to look up every once in a while and view things from a new perspective.

To wonder if perhaps I could learn something from the slow pace of snails, or about how to patiently wait for the right time for movement if I get philosophical about it.

More importantly, it reminds me to look for the unseen and unknown currents at work in my life.

When my first plant died, I assumed it was my fault and I had done something wrong with the watering of it.

At first I thought I must be watering it too little. Then I wondered if it was too much.

I believed that I could somehow save the plant by mastering correct watering timing.

All the while not noticing that watering the plant was awakening snails, and it was the snails that were eating my plant’s roots and bulbs.

I could only see as far as my water bottle.

My ability to fix the problem was completely limited by my scope of awareness.

No amount of watering or lack of watering at that point was going to save my last plant. The snails had already been awakened and were deep at work in the roots of that pearl plant, cutting off the supply of moisture to the top bits and drying it up.

And isn’t it like that in our lives sometimes, too, that we suffer and fuss and attempt to logic our way out of situations of which we are lacking all the information?

It’s so hard to make the “right” call when we don’t even know what’s happening!

The reality is this: we do our best with the knowledge and information we have.

Sometimes, we need to get an outside look at things or come at it again later from a different perspective to be able to see the whole story.

And from there, we get to decide what we want to do.

What is effective for us.

What makes us happy.

This time, I’m deciding to keep a family of snails and only feed them fallen leaves instead of fresh plants.  I’m deciding not to put any new plants I love in a pot that I know holds death for them.

I’m not killing the snails either. I’m a softie like that.

PS – Getting the perspective to take in more information sometimes is fastest with an outside moderator and guide. I’d love to be that guide for you.

Get personalized coaching and an opportunity to practice operating from an expanded perspective in the Talisman Transformation Method Program. The December group starts on December 15th. You can apply HERE now and even receive a scholarship! What are you waiting for?